Monday's Not Coming: The Stories That Don't Make The Headlines 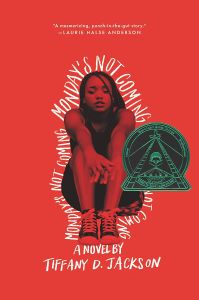 As a bookworm and true crime fanatic I was instantly intrigued by the storyline to Monday’s Not Coming. And, as a Black woman and advocate for children it broke my heart while also giving me hope because this much-needed story about a missing Black girl is being told. The problem of missing and exploited children is serious across all races and socio-economic classes in this country. However, the majority of missing children who make the news are white. We know the story of Elizabeth Smart and the horror of Caylee Anthony, but the National Center for Missing and Exploited Children, founded in 1984, estimates that 70,000 young Black women are missing in the United States today. It is rare that we hear about these girls on national news.

Using a character named Monday, Tiffany D. Jackson took on the daunting task of bringing one of these stories to life. As I read, I couldn’t help but feel that Monday is a composite of the girls I’ve taught, coached and mentored throughout my career. The young women who touch your spirit, the ones who you think about when they aren’t around...the ones who give you the sense that something’s not quite right in their world.

While one coach, teacher or mentor can make a difference in an individual child’s life or even a handful of children, they cannot make mass change alone. The overarching problem is that the system fails our children because it  was never set up for them to succeed in the first place. They fall through the cracks, they go unnoticed and some of them even disappear. Mainstream media does not share these stories - we do not see girls like Monday dominating the headlines. Because Black history is only highlighted for one month out of the year, we understand that the Black voice is so often missing from the narrative. Oftentimes, when it is represented people tune out because they are not comfortable hearing what is being said.

Monday’s Not Coming is not a feel good story, but it is necessary. It is so important for students of color to read about themselves and understand that they matter. Documenting Monday’s  story cements the facts about incidents that occur in communities of color, and gives a voice to the tens of thousands of young girls who are unaccounted for. We must insist for authors of colors to be published, purchased and added to curriculum so that all students become familiar with the Black experience. The Black experience is a part of the American experience, and leaving it out of the classroom does a disservice to all students. They are not being developed to be good citizens if they aren’t given the tools to see the humanity in people who don’t look like them, or come from different socio-economic backgrounds. Educators, it is not easy, but there are resources out there to support you as you work everyday to support ALL of your students.

Appreciating Teachers All Year Round