As we pursue our goal of inclusive classrooms, I wanted to share with you a blog we published last Spring. CRE Pitfalls: Avoiding Reinforcing Stereotypes. This blog is so timely for educators facing the struggle of teaching through a global healthcare crisis and domestic social unrest. We are committed to providing resources that empower teachers to lead their students and ensure all voices are represented and elevated.

Several years ago I was obsessed with listening to TED Talks. It was in the midst of this obsession that I stumbled upon Chimamanda Ngozi Adichie’s TED Talk, The Danger of a Single Story. In her presentation, Adichie explains that a single story is when human beings who are made up of a set of complex experiences and beliefs are reduced to a single narrative and that when people are reduced to a single story their humanity is stripped away. As an educator committed to the education of liberation, I find myself coming back to Adichie’s words over and over again, but her word of warning came to me most ponigently a couple of years ago during a curriculum meeting with a team of ELA teachers.
Prior to joining Teaching Matters, I was an Assistant Principal at a middle school in the South Bronx. Each year during June, I led the ELA and Social Studies departments through an audit of our curriculum. As a school, we undertook the curriculum audit with great care because of our commitment to strategically creating a learning environment that centered, affirmed, respected, and cultivated the assets of our students. With this focus in mind, an integral piece of the audit centered on the cultural responsiveness of our curriculum. We were two years into the ritual of auditing our curriculum with a focus on CR-SE when I discovered a new tool created by NYU’s Metro Center to rate curriculum for culturally responsiveness.
Before using the Metro Center’s Culturally Responsive Scorecard, I was confident our ELA team had chosen a set of texts and topics that not only reflected our specific school community, but also provided windows into the communities of others. Thus when I introduced this new tool to the team, I was not anticipating the outcome that would ensue.

After completing the first section of the scorecard, we determined our comprehensive 6th-8th curriculum had a diverse mix of authors and characters. We were riding high as it had taken us a long time to curate the curriculum to align to Common Core Standards, meet grade level text complexity requirements, and affirm the racial and cultural identities of our students. However, the high was short lived, as the team began critically evaluating our curriculum through the lense of representation as outlined on the scorecard we realized we had a problem on our hands. The problem Adichie had warned about.

We uncovered that while the characters in the texts we had chosen were diverse, the texts when surveyed as a whole from 6th-8th grade did not capture a wide representation of those characters.

Curriculum is an important component of culturally responsive teaching, as it is ideas, stories, information, assignments, and images that impact how young people make sense of the world, and “contribute to the centering and normalizing of people, cultures, and values” (Metro Center’s Culturally Responsive Scorecard). A potential danger as schools move to incorporate the principles outlined in the Culturally Responsive-Sustaining Framework (CR-SE) released by the New York State Education Department (NYSED), is that curriculum will be chosen based solely on the diversity of characters and authors without an in depth interrogation of the stories being told within the texts of the curriculum.

Without an intentional analysis of the representation and the orientation to social justice of each text, these decisions can potentially lead to the creation of learning environments that are thought to be culturally responsive, but in actuality are reinforcing stereotypes and portraying people of color and other marginalized communities in inferior, destructive, or historically inaccurate ways.

For ELA curriculum to be culturally responsive, it not only needs to include a diverse set of characters and authors, it needs to respond to the humanity of the characters and the people’s stories it is telling. The stories need to be not only be humanizing, but also “liberatory and equity oriented” (NYU Metro Center Culturally Responsive Scorecard).

Researchers Moje and Hinchmen explain in their writing on culturally responsive practices for youth literacy, that “culturally responsive pedagogy should begin with the formation of relationships between teachers and students...educators should use students’ experiences to challenge and reshape the academic content knowledge and literacy practice of the curriculum” (Moje & Hinchman 2004). Choosing texts with diverse characters and by diverse authors is critical, but choosing texts and topics using this criteria alone will not meet the requirements of CR-SE and ultimately will not lead to a liberating educational experience for students. Schools must examine the stories being told in the books they choose, but before schools begin to review their current curriculum through the lense of CR-SE or purchase new curriculum billed as “culturally responsive”, they need to develop an understanding of the most important component of CR-SE, the racial and cultural identities of the students sitting in their classrooms.

Acknowledging the communities represented in a school is the first step in developing culturally responsive education. No community or person is a singular moment or story and culturally responsive ELA curriculum is not just books with diverse characters. True CR-SE relies on the rich and complex cultural narratives of the classroom community to develop and nurture lasting and intrinsic connections to content.

Below is a worksheet from Dr. Sharroky Hollie to evaluate the text you chose. 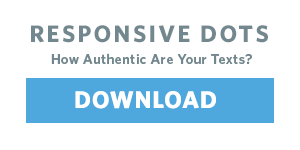 The Role of a Custom Coach