When Justice is the Exception 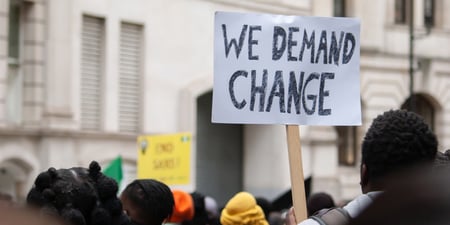 Social injustice has been a recurring theme in American life and once again has dominated our lives, communities and classrooms for the last 331 days since the murder of George Floyd. People of Color (particularly Black people) have lived with the threats of social injustices for far too long. We SHOULD NOT be living in times that cause us to hold our breath and pray, wish, and hope for justice for any American. THIS SHOULD BE A GIVEN!

The overwhelming evidence in this case should have been obvious, and should have left us all feeling assured that there would be accountability and that justice would indeed be served. And yet, overwhelming evidence has been present in many prior incidents and cases just to have the justice system tell us that what we saw, what we heard, what we clearly experienced was truly not so.

Naomi Osaka said it best in her tweet Tuesday, “I was going to make a celebratory tweet but then I was hit with sadness because we are celebrating something that is clear as day. The fact that so many injustices occurred to make us hold our breath toward this outcome is really telling…”

Most of my generation watched LA erupt into riots 30 years ago after 4 white officers were acquitted of excessive force in the arrest and beating of Rodney King. While many were rightfully shocked and outraged at the lack of justice, older generations were reminded that 37 years earlier the murderers of Emmett Till were acquitted of their brutal crime. Now, more than 60 years later, Derek Chauvin was found guilty on all three charges for murdering George Floyd.

We can collectively exhale and let go of the fear of the outcome that has too often befallen victims of color in our country. The fact that a just verdict was a surprise and hope for so many people is disheartening. All Americans should be able to have an expectation of justice from the system that is supposed to be representative of the rights and liberties of us all.

Headlines are calling last night’s verdict a relief, and it is, but it is not a remedy. One instance of accountability can not and does not undo the long lasting effects of injustice - especially when the injustice is perpetrated by those that are sworn to protect us. The grieving families deserve so much more, our communities need so much more, and for the next generation we, as educators, must empower our children to demand so much more than the bare minimum from the justice system.

It's All About the Plan: A MindSet Shift Towards Unfinished Learning